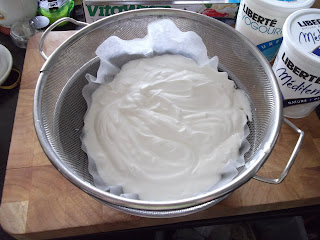 I sometimes refer to using "strained yogurt" in some dishes. The process of straining yogurt is to draw out water which turns regular old plain runny yogurt into a rich unctuous ingredient or dish. It is a suitable replacement for sour cream with lower fat and little extra zing.


Strained yogurt is traditionally used in popular mediterranean and middle eastern recipes such as tzatziki (tzatziki is that rich white cucumber, garlicky stuff that oozes out of a proper souvlaki while you're trying to eat it). It is called Labneh in the Middle-East, but its name varies depending on the country where it's made : Chakka (India), Skyr (Iceland), Mastou (Iraq), Sakoulas (Greece), etc...


Many years ago I brought a container of labneh and some flatbread to a dear Lebanese friend's house for snacks only to be told, "we never buy labneh, we just put a paper towel in a strainer, dump yogurt on top and let it sit over a bowl overnight". She added "my grandmother would sometimes drizzle some cream over the yogurt to add a bit of richness". That was not the last time I bought a ready-to-eat $10 container of Phoenicia brand labneh because sometimes, I want to eat/serve it now and don't have a couple hours or overnight to wait for the water to draw out. But it is fairly infrequent that I don't strain my own. 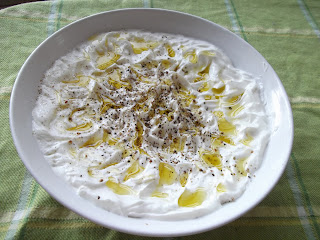 Use it to make your favourite sour cream based dip recipes or add a touch of garlic, salt, coarsely ground pepper and drizzle with olive oil and serve, as is.

Yogurt: I like Liberty brand yogurt. It is full in flavour and does not contain gelatin or other thickeners. It is what yogurt should be: milk product and bacterial culture. I like to mix their Mediterranean (10% m.f.) with their 2% to what I consider a happy medium. It still tastes rich and sinful but has almost half the fat of most store bought labneh.

Flatbread: a local chef, and good friend Q, introduced me to a little gem in my own neighbourhood. Momoi, a Sri-Lankan bakery, bakes fresh nan, roti and chapati flatbreads daily. Before I even tasted the nan I was enamoured by the soft bouncy feel of it through the bag, but once I tasted it, I was hooked. Slightly warmed served with labneh...divine.
Posted by Leyenda at 3:12 PM

Leyenda
Food-centric food nerd with a love for her awesome DJ husband, fat cat, and cooking, living and eating in Montreal.